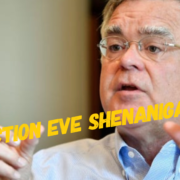 Metro Nashville has certainly had elections with more drama and mud-slinging than the one scheduled for tomorrow, but as is always the case, disputes between candidates and their camps always rise to fever pitch the week of the election. The Holler is doing our part to call attention to some of the more egregious acts with our Election Eve Shenanigans Spotlight.

Depending on who you favor, it’s either worse than John Cooper – widely considered to be the biggest challenger to incumbent David Briley – has self-funded his campaign with about $1.5 of his own money, some of which has been earned from private development, or that Briley has taken hundreds of thousands in contributions from members of Nashville’s development community.

While controversial, neither rises to scandal. However, activist Eric Patton charges Cooper has violated campaign finance law by accepting contributions for a run-off he isn’t assured of making yet.

Cooper’s pre-general election financial disclosure, filed with the Davidson County Election Commission, shows he’s taken the maximum donation amount – $1,600 – from his treasurer, Mary Falls, and from his oldest brother, William Cooper. But he’s also taken the maximum amount from both Falls and William Cooper and earmarked it for the runoff election, which is slated for Sept. 12.

Patton filed an ethics complaint with the office of District Attorney Glen Funk Tuesday and said today he’s waiting on a response from the DA. 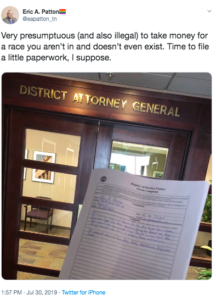 Davidson County Administrator of Elections Joan Nixon confirmed in a phone call with the Holler that candidates are prohibited from accepting contributions for the runoff until after the August 1 general election.

In 2015, four mayoral candidates —  Megan Barry, Charles Robert Bone, Bill Freeman and Jeremy Kane — similarly took too much too soon and were ordered by Nixon to refund it.

Thus far, no punches have been thrown, as there were in 2015 when candidates Nick Leonardo (now a judge) and the late Loniel Green became physical at on Election Day 2015 at Cathedral of Praise, D1’s largest precinct. But the usual negative mail pieces and Facebook posts abound. Here are a couple:

Davette Blalock, a two-term Metro Council member and 2016 Trump backer, supports Dixon, as does former council member Roy Dale. Dale is an engineer and developer who attracts controversy: In 2018, he served as a consulting engineer in the proposed move of a grease and waste water treatment to in North Nashville. Earlier in his career, while running for Council at Large in 2003 (against David Briley and current At Large candidate Adam Dread) Dale took an anti-gay approach and sent mailers disparaging Briley for supporting anti-discrimination measures to protect gay and lesbian Metro employees.

Dale’s anti-gay rhetoric is notable: Bradford is openly gay. And Dale and Blalock have formed a PAC that has apparently spent money on nothing but mail pieces to support Dixon 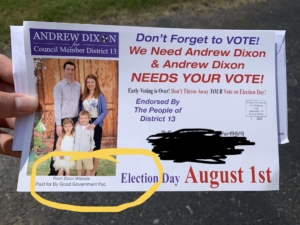 In fact, ‘Good Government PAC’ wasn’t registered with Metro Nashville as of Tuesday, July 30 but is federally registered to

Dale’s office address. One would think two people with a combined four terms on council would know the dangers of supporting a local candidate with an illegal PAC, but apparently not.

Unlike Dale and Blalock, Meredith doesn’t make voters guess at his motives. Scoop Nashville wrote in April about Meredith’s tweets saying that calling black women apes is funny; that the business world would be better without women; and referring to gay men as ‘prissy homosexuals.’

So no surprise Meredith attacked Bradford on Facebook today, using an unflattering picture of Bradford presumably in costume with the phrase: ‘Why send a boy to do a man’s job?’

Meredith was promptly roasted on his own page for his derogatory portrayal of Bradford. 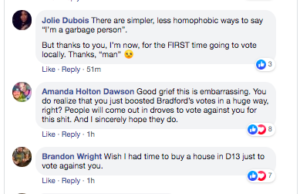 Incumbent Dave Rosenberg faces Michelle Foreman, a member of the Tennessee Republican Party Executive Committee. Foreman makes a number of charges against Roseberg, including belittling him for moving to Nashville, as many others have, from other cities, voting to make Nashville a sanctuary city and critically tweeting about Trump. We at the Holler can’t vote for Rosenberg but on the basis of Foreman’s charges, he sounds good to us. 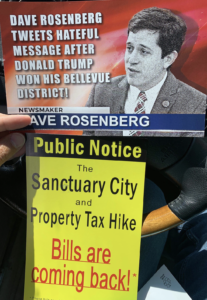 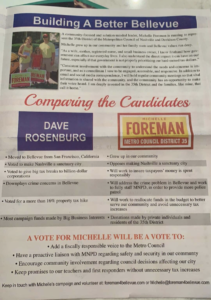 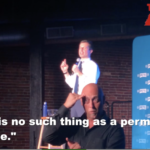 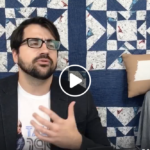