You are here: Home / love

With black kids being expelled & suspended at alarming rates, Rep. Harold Love’s bill for teachers to at least consider a child’s home environment before expelling/suspending them meets resistance from Rep. Terri Lynn Weaver, who skeptically asks why anyone would use science when it comes to bad behavior and thinks the problem may be that teachers aren’t allowed to discipline:

“Some of these kids need a spanking.”

The bill moved on to full committee. Watch the HIGHLIGHTS: 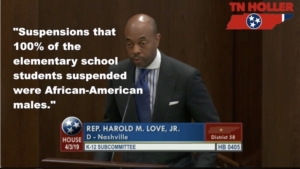