You are here: Home / heidi 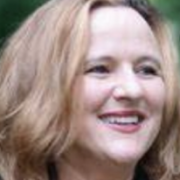 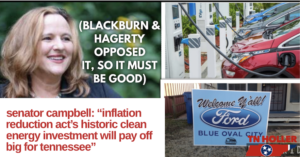 Campbell, a candidate for Congress in the state’s Fifth District, says the U.S. House should send the bill to the president’s desk.

“This is the boldest climate package in U.S. history and the clean energy incentives are a perfect match for the investments we’ve made in the electric vehicle industry,” Sen. Campbell said. “This legislation will lower costs for families, cut prescription drug prices and create thousands of good-paying jobs in Tennessee — all without raising taxes on working people.”

The Inflation Reduction Act passed the U.S. Senate 51–50 on Sunday with both Sen. Marsha Blackburn and Sen. Bill Hagerty voting against it. The measure heads to the U.S. House this week.

The bill allows roughly $374 billion in climate and energy spending, including an extension and improvement of the $7,500 electric vehicle tax credit. Under the act, the tax credit is renewed for a decade starting in 2023 and, for the first time, all EV manufacturers will have access to unlimited credits — but the vehicles have to be made in North America.

“No state economy is better positioned to benefit from the electric vehicle incentives than Tennessee,” Sen. Campbell said. “We’re going to build a stronger middle class with American manufacturing jobs and our working families are going to build the world’s clean energy future right here in the Volunteer State.”

Tennessee is already the top state in the Southeast for electric vehicle jobs and investment with General Motors, Nissan and Volkswagen all producing electric vehicles here, according to the Tennessee Department of Economic and Community Development.

Additionally, Ford Motor Company has begun work in West Tennessee on its $5.6 billion BlueOval City project, a partnership with SK Innovation that will produce the next generation of F-Series electric trucks and electric vehicle batteries.

Also, Tritium DCFC Limited, an international manufacturer of electric vehicle charging stations, announced in February it will establish a U.S. manufacturing base in Lebanon, Tenn.

As important as the electric vehicle incentives are in Tennessee, the Inflation Reduction Act does a lot more for working families. This economic plan would lower costs by allowing Medicare to negotiate drug prices, bring down health insurance premiums on HealthCare.gov, and make investments in clean energy, like wind and solar power.

The legislation, which will also reduce the federal deficit by $300 billion, is funded by creating a minimum 15 percent tax on the corporate profits of giant companies and by cracking down on tax cheats.

Tennessee’s 5th Congressional is now the most closely watched race in the state.

This is Sen. Campbell’s fifth race in a purple area of Tennessee. She’s undefeated and headed into the General Election in a position of strength having raised about $430,000.

(THIS WAS A STATEMENT SENT OUT BY THE CAMPBELL CAMPAIGN)