You are here: Home / privatization 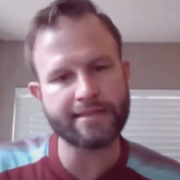 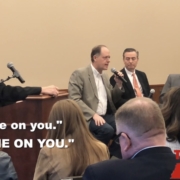 Senator Johnson Brought up both pillars of Governor Lee’s education privatization platform – the statewide charter authorization board (which would be able to overrule local boards who decline to approve a charter), and vouchers.

Johnson accused school boards and other organizations of disseminating misinformation about the vouchers, and said while they care about public schools, he cares about the kid, offering harsh words for recent school boards (like his own in Williamson County) who have passed resolutions against charters:

“Do you understand the optics of that? We’re the wealthiest, whitest county in the state, and we’re saying we don’t want to do something to help inner-city kids who are poor and predominantly minorities. Shame on you. SHAME ON YOU.”

Johnson, the Senate Majority Leader, also brought up the Governor’s friendship with Jeb Bush and used Florida as evidence of the success of vouchers and charter schools:

“Jeb Bush was elected in 1998 and he ran on a platform of education reform, including education choice (vouchers) and expansion of charter schools. The state of Florida went from 40th in the nation for 4th grade reading among poor and minority students to 1st. 40th to 1st. You cannot argue with the results, they work.”

Johnson says nothing about a time frame, and offers no clues about how the success is attributed to charters and vouchers, so it has been difficult to verify this claim. Florida does not appear to be “#1” in anything, according to state rankings on the National Assessment of Education Progress, aka the nation’s report card.
The top performer on the NAEP every year for decades has been Massachusetts which has a cap on the number of charters allowed in the state and does not have a voucher program. The bottom performer is Louisiana which has had charter schools and extensive voucher programs for many years.
Extensive research on the education impact of vouchers has consistently found negative results.
Research on the impact of charters is mixed at best, with overall results usually comparable to public schools, and this op-ed from the Sun-Sentinal editorial board in March called “CHARTER SCHOOL COMPANIES FEAST AT THE PUBLIC TROUGH” makes it clear that in Florida the main beneficiaries of charters schools have been private companies raking in public dough:

“Florida has become Exhibit A of both counts: profiteering and interest group politics. Under the uncritical eyes of an indulgent Legislature, for-profit education companies now manage nearly half of the state’s 650 publicly financed charter schools and enroll more than 130,000 students, but with woefully insufficient controls on what they spend and to whom they pay it. Like the private prison industry and other banqueters at the public trough, they’re investing heavily in lobbying — $5.3 million in just over 10 years — and in political expenditures.”

“During a charter school visit last month, Gov. DeSantis said he wanted to do something about “bad actors” in the industry, but he has yet to say what that would be. However “bad actors” might be defined, the root of the problem is larger. It’s the very existence of the for-profit sector. Charter schools should be non-profit in all respects, not just on paper.”

Some say Florida vouchers are helping certain kids get into college, but a recent Orlando Sun-Sentinel report exposed a windfall going to private schools through public vouchers with little oversight.
As education expert Jeff Bryant of Education Opportunity Network puts it:

“What the charter/voucher proponents (in Tennessee) may be referring to with their claim of Florida being #1 in reading is the most recent round of NAEP scores that found the state was one of few to make significant gains in reading scores. But that can in no way be attributed to vouchers and charters. The jump likely has multiple causes. Florida 4th graders out-perform the national average on the NAEP reading exam but 8th graders are about average. The boost on the NAEP for 4th graders could be attributed to the state law that requires retaining 3rd graders who flunk state reading tests, which could artificially inflate the 4th grade NAEP reading scores.”

Johnson also implies that Governor Lee will be reimbursing the money lost by schools when kids go elsewhere, but is also careful to say “for 3 years”. No word on what happens after that.
The idea that public schools won’t be losing money on account of vouchers is contradicted by all evidence. If you agree public money belongs in public schools, holler at Senator Jack Johnson HERE.
https://tnholler.com/wp-content/uploads/2019/04/johnson-header-new.jpg 684 1228 Staff https://tnholler.com/wp-content/uploads/2019/01/TN-Hollerv5-300x172.png Staff2019-04-01 19:25:262019-04-01 19:39:44Sen. Jack Johnson To Anti-Vouchers School Boards: "SHAME ON YOU!"